The Heritage of the Templars

The Templars had a major role in battles since the reign of the first Portuguese King (D. Afonso Henriques) until the Discoveries. The Templars, and later on, the “Order of Christ”, settled in Tomar becoming the Templar Capital of Portugal and Spain and one of the most important in the Medieval Era. The Almourol and Tomar castles are perfect examples to understand the mystique of the Templars, men who were simultaneously Warriors, Knights and Monks.

Almourol Castle: This castle was reconstructed in 1171 by the first Portuguese Gran Master Gualdim Pais. Since it was built on an island in the middle of the River Tejo, we will have to take a boat to visit it.

Constância Village: Be amazed with the natural beauty of Constância!

Historic centre of Tomar: One of the historic centres of Portugal with the highest concentration of monuments, especially the churches of ‘São João Baptista’ and of ‘Santa Maria do Olival’ and the ancient 15th Century Jewish synagogue.

Tomar Castle: Founded by the Portuguese Grand Master D. Gualdim Pais, in 1160, to become the headquarters of the religious and military order of the Knights Templars.

Convent of Christ: After the extinction of the Knights Templars in 1312, King Dinis creates a new religious militia the Military Order of Our Lord Jesus Christ, claiming the need to defend Portugal from Islam. The headquarters of the Order of Christ is set up in the former Knights Templars headquarters in 1357 where it will remain for centuries. Regarded as one of the greatest monastic complex in Europe was classified by UNESCO as a world heritage site in 1983. Inside we can see the Charola, the Knights round temple, the unique western window designed in Portuguese late gothic style and the main cloister, a masterpiece of Renaissance architecture.” 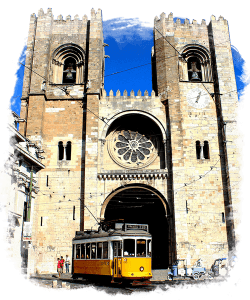 Lisbon of Neighborhoods I
Alfama, Mouraria and Castelo 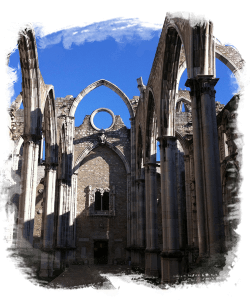 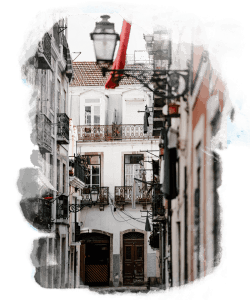