Village of Sintra
The mild climate of Sintra, combined with the frequent presence of the royal court, made the Sintra Mountains the favorite place of the Portuguese aristocracy, especially in the Manueline era and right after in the kingdom of D. João III. Often surrounded by a mist, disguising the mountain peaks and turning them mysterious, was one of the favorite reasons for the stay of the big writers and romantic artists, searching for exotic and enigmatic corners with potential to inspire, multiply sensations, a place of love to nature that emanates from the sublime huge and threatening rocks.

Pena Palace
A fascinating fairytale castle, located in one of the highest peaks of the Sintra Mountains. The Palace comprises two wings: the old Manueline convent of the Order of Saint Jerome and the wing that was established in the XIX century by D. Fernando II. D. Fernando transformed an old convent in a palatial residence of romantic influences. He ordered to plant the park of Pena in the areas surrounding the Palace in the style of romantic gardens, with serpentine roads and stone benches as waypoints, as well as trees and other plants from all over the world, taking advantage of the humid climate of the mountains of Sintra and creating from scratch an exotic park with over five hundred tree species.

Quinta da Regaleira
One of the most surprising locations of Sintra. Its gardens and enigmatic constructions, like the tunnel of initiation, embody a mystic symbolism and secret characteristics connected to the freemasons.

Moors Castle
Fortress of the VIII. century, located on top of the hill, surrounded by a unique landscape that extends to the Atlantic ocean. This military fortress is witness of the islamic presence in the region.

Cape Roca
The most western point of Europe.

Boca do Inferno (Hell Mouth)
A type of cave that combines its natural beauty with the impressiveness of the rebellious sea. Location of magnificent sunsets. 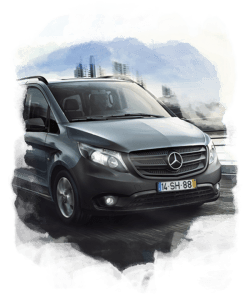 Van From 55€
Adding to cart 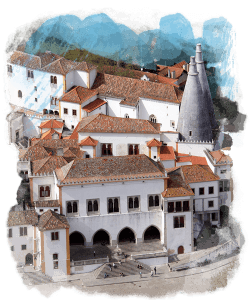 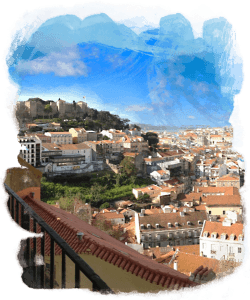 Van From 45€/person
Adding to cart